Skilled Trades– What are some of the Benefits?

Are you dreaming about a career where you stay active, both mentally and physically, earn a good living wage and start your adult life with little or zero school debt?

In the 90s and early 00s, everything was about the business world. This new thing called the internet was taking off, and dream jobs were those in which you sat in an office with a computer and made millions. Those jobs were not terribly difficult to come by. Today’s youth have those same notions of where the good jobs are, but nowhere near the same success in finding them. It’s time young people looked outside the white collar box when it comes to landing a steady, good paying job.

The stereotype that most needs breaking — that blue collar careers are beneath white collar ones and less desirable. The simple reality is that they aren’t, and here are 5 good reasons why:

One of the biggest benefits to working in the skilled trades is the education required. While there are many positives to going to 4 years of school for a bachelor’s degree, there are also a few big negatives, including cost. Since 1990, tuition costs have risen over 300%, far outpacing the growth of the economy. When costs rise at 7-8% per year, while inflation grows 2-3% per year, you end up with a product that becomes unaffordable. For many folks, though, that unaffordability isn’t standing in the way, because student loans are easy to come by. Because of that, about 2/3 of students with bachelor’s degrees are leaving college with debt that averages $26,000 per student. That’ll make for a $300 monthly payment for a decade. All in all, your average bachelor’s degree is likely going to cost you over $100,000 — closer to $150k if completely financed through loans.

The vast majority of training programs for the skilled trades, on the other hand, last from 6 months to 2 years, and will cost just over $30,000. Even if that cost is entirely financed by student loans, you’re looking at a total of $40,000, which is still a savings of at least $110k!

This makes for a huge opportunity cost for those going to 4-year colleges. You’re spending an extra 2-3 years in school, paying tens of thousands per year, while the tradesman is already graduated and earning money (in some cases, making six figures as a 21-year-old).

One final factor is simply that some 18-year-olds aren’t ready for a college environment. You’re thrown off the cliff from your warm and comfortable home life into total independence. It’s not an easy transition for anyone; in fact, about 40% of all undergrad enrollees will drop out before earning a degree.

Trade school offers a nice on-ramp to independence. You’ll often stay close to home, you receive real-world, hands-on training from the get-go, and you aren’t spending every waking moment with folks your same age and in the same position in life. There are certainly benefits to attending a 4-year university, but the big pros of trade school are that you’ll save a lot on tuition, start being able to make money sooner, and can start taking measurable steps towards adulthood more quickly.

Many teenagers see and hear of other making money with their “office” jobs and while money is not the deal-breaking factor in determining a career, it is certainly important. The assumption is that the income ceiling is higher for white collar work than it is for blue collar. And frankly, in an absolute sense, that’s true. Those who are pulling in a million a year aren’t tradesman; the vast majority are college graduates. But these very wealthy individuals represent a miniscule percentage of the workforce.

If we look at averages, which is where most of us are and will be in terms of our career, the paychecks for trades are either at or above other careers. One study of the trades from just the state of Florida found the above to be true — that the ceiling was higher for white collar, but the median was actually higher for blue collar. The range for the average skilled trades (per hour) was $15.88-$40.00, for a median of $34/hour.

Let’s take a look at the starting salaries of the largest skilled trades careers, and you’ll see they match up against the average starting salary for college grads (which is reported to be $50,000 – and let me tell you, I don’t know a single bachelor’s degree holder who started out at that high of a salary!). Now keep in mind these are starting salaries:

Remember, those are the most common blue collar jobs. If you look at the higher end of trades work, you’ll see wages that are much higher than college grads:

Remember, these are base salaries that come just as a result of your having the proper skills. Just like with white collar work, there are many trades fields in which you can move up the ladder and earn far more. If you show management skills and big picture vision, you’ll receive promotions and raises, just as you would in an office setting. You can also start your own business, and use your entrepreneurial, creative, and customer service skills to set yourself apart from the pack, at which point your income potential is as high as your ability to hustle.

You may be surprised to learn that being a tradesman could get into that somewhat hallowed six-figure salary range in far less time, and with far less money spent on schooling, than just about any other field of work. And you could possibly make even more than that; think a plumber can’t make a million bucks a year? Think again!

Beyond wages, there are many other factors that actually play a more important role in workplace satisfaction. Which leads to our next point… 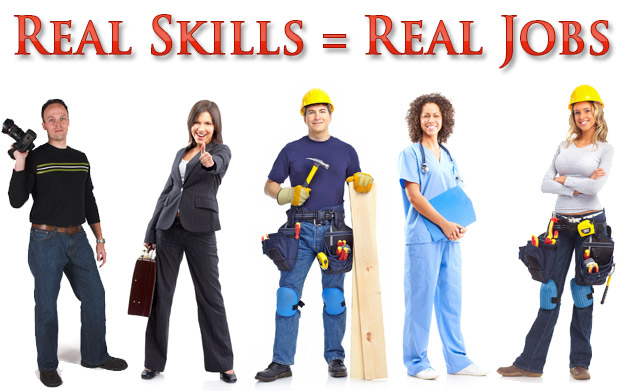 Compensation is important, but only the third most important factor in overall job satisfaction. The first is actually “opportunity to use skills and abilities” ( and the second is job security.

In our new economy, complete job security just doesn’t exist. Anything can happen to any company, and you can be let go. But some jobs are a lot more secure than others. Information and tech jobs are particularly vulnerable to being taken over by robots or moved overseas, but even once-secure jobs in the medical and legal sectors have begun to be outsourced as well.

The trades, on the other hand, cannot be outsourced. While the world may not always need bloggers, it will always need mechanics, electricians, plumbers, welders, etc. When you’re locked out of your house, you won’t phone a customer service line and deal with robots trying to resolve your issue, you’ll call a locksmith. The roads and bridges in this country will always be built here. Our skyscraper projects won’t be constructed overseas and shipped over .

One of the points that Mike Rowe hammers home in his book, Profoundly Disconnected, is that Americans are disconnected from the things that keep our lives and society running on a daily basis . Without the trades, our society would literally crumble. Roads/bridges would go into disrepair. Cars would break down and not be fixed, and new cars wouldn’t be made to replace them. Our electrical grid would shut down and we’d lose power. Plumbing would break down or back up, and we’d all be swimming in our own waste.  Without more skilled tradesmen, it will only get worse.

4. Availability: There Are Plenty of Jobs For the Taking 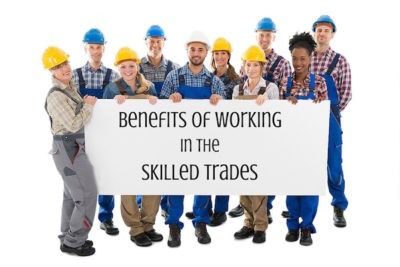 Trades jobs are not only very secure, there’s a whole lot of openings for them as well.

A big part of that reality is simply that there are more tradesmen retiring than entering the field. Among all jobs in the US, workers aged 25-44 make up about 48% of the workforce; among skilled trades jobs that number is 46%, a mere 2-point difference. When you look at the 45-54 age range the picture is very different. That group makes up 23% of the general workforce, but 32% of skilled trades, meaning that millions more tradesmen will be retiring in the next 15 years than white collar professionals.

For the blue collar worker, there are jobs to be had. They may not be in your city of choice, but that’s a reality faced by much more than just tradesmen. Certain industries flock to certain geographical regions, so to be successful you may have to move. According to some estimates, there are literally millions of unfilled jobs right now in the skilled trades, with many more to be created in the years to come.

In fact, in just the next two years, an expected 2.5 million middle-skill jobs (those that require less than a bachelor’s degree but more than a high school diploma) will be added to the workforce, accounting for an incredible 40% of all job growth.

All over the country, the skilled tradesman is in demand.

5. You get to do what you’re good at (and you probably love it)

A lot of college graduates leave their university with a degree in one field, but end up working in something else. Why earn a $40,000 to $160,000 piece of paper and settle for any job that’s hiring? With a trade skill, you have the necessary education and training, so you can easily start your own business or apply for a highly specific job – and most likely get it.